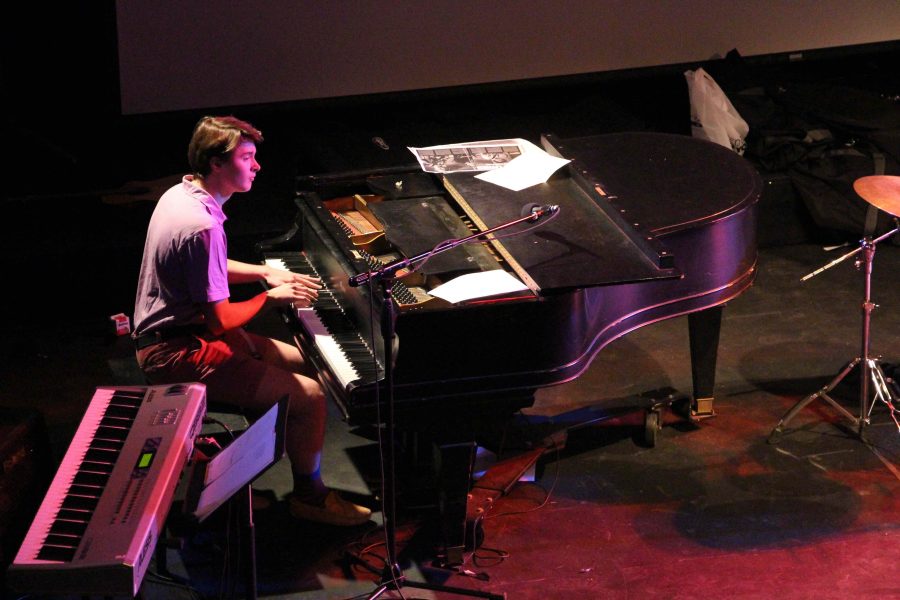 Jackson is a member of the House Band, in addition to performing gigs outside of Hackley.

The CDC cites beginning to sort shapes and colors as a developmental milestone at 2 years old; at that age, Hackley senior Jackson Corrigan was already playing the organ. Two years later, he began playing the piano. An avid pianist, his passion began with a focus on classical music with his first instructor. Now, he continues studying and playing piano, but his focus has shifted. “I don’t play classical much anymore; I play lots of jazz mostly and a lot of modern music, like fusion,” he said.

Jackson plays for Hackley’s House Band at Coffeehouse, and his favorite gig was last year at the Hudson Room, a fusion restaurant in Peekskill, NY. “It was cool because I had a residency there, so for six weeks every Friday, I would play from 9 p.m. until midnight,” he said. “It was definitely tough to balance sports, work, and then playing until midnight every Friday, but it was a lot of fun. A lot of friends came out and supported, and a few teachers, actually. [History teacher Vladimir] Klimenko showed up, which was super cool,” Jackson continued.

He finds his gigs through Lagond, the music school he attends, where a lot of the teachers are working professional musicians. One of his first paid gigs was Hackley’s AP Art Show during his sophomore year; before paid gigs, Jackson competed in various classical competitions.

In addition to practicing piano and taking lessons on the Hammond organ, he also trained his pitch recognition for several years with voice lessons. Besides his musical endeavors, Jackson was a captain of the Varsity Soccer team this past fall, and is currently a captain of the Varsity Swimming team as well. With his diligent work ethic and impressive dexterity (he can stretch his hand the length of an eleventh (from notes C to F)), it is easy to understand how Jackson seems so effortless on stage during his performances.

Jackson achieves his success by playing for about 2 hours every day, listening to recorded pianists, and doing written work. He said, “A really good [way to improve] is to listen to a recording and try to write down in musical notation what you’ve heard. It’s much easier for me to listen to something and play it right back, but [it’s much more difficult] to hear something and to write it down in musical notation.”

To other aspiring pianists, Jackson suggests, “Listen as much as you can, and play as many gigs as you possibly can. Once, I went to a gig at an okay venue and was only half into it, but someone at the venue heard me play and contacted me…so that’s something that can happen more often than you probably think,” he said.

He intends to continue playing piano in college in jazz ensembles or band combos. “I plan on being a big part of the performing community,” he said. Jackson aspires to major in music at a liberal arts college and take courses that require essay writing about the history of music and certain artists.

Jackson is a very impressive pianist, and based on his accomplishments so far, his collegiate future seems very bright.