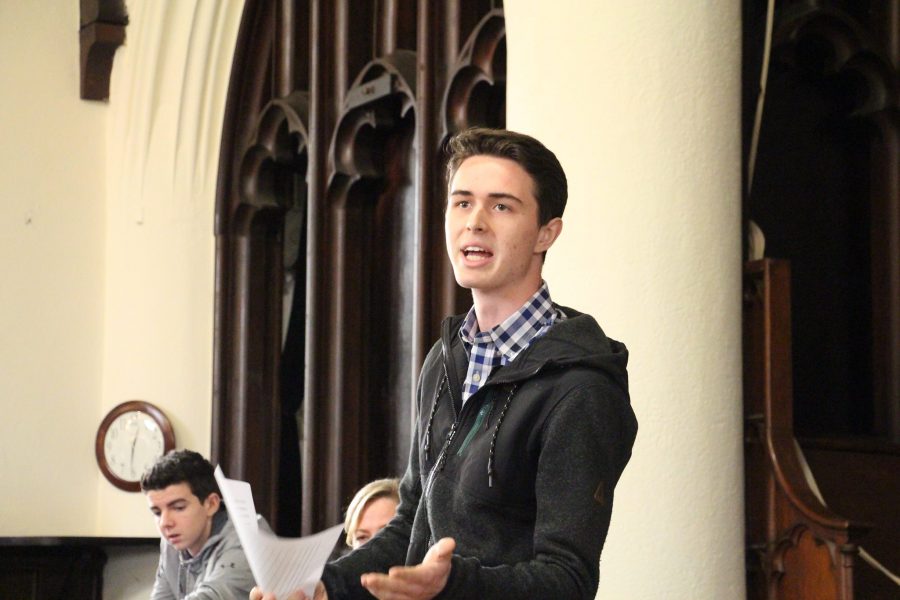 Senior Fin McCombe shares his views on managing deadlines with the freshman and sophomore classes. Fin's speech was part of a series of senior Chapel Talks. It was enthusiastically received by underclassmen who look forward to hearing more speeches in the weeks to come.

The chapel at Hackley is bustling with the chatter and movement of 200 Upper School students. The mood is heavy with early morning exhaustion and students are fighting for a seat in a row with their friends. But all of this stops when a slightly nervous senior steps onto the stage and begins to speak.

Most students develop their individual morals and views on the world during their time at high school. However, this is also a time of rebellion where teenagers are less likely to listen to their teachers and parents who “just don’t understand.” Hackley has developed a program that will give students an opportunity to learn these lessons instead from the people who have most recently gone through the upper school: seniors.

These senior Chapel Talks are beneficial for not only underclassmen, but they also give outgoing seniors a chance to pass on the most important lessons that they learned during their years at Hackley. These seniors are free to speak about whichever topic they find the most compelling. The speeches have varied from Hope Weisman’s account on her journey through comedy to Fin McCombe’s revelation that deadlines aren’t always meant to be followed.

The senior speech program was created during the 2015-2016 school year and has been continued because of its great success.  After hearing five senior speeches so far this year, freshman Dylan Wade says that “a lot of things that they [the seniors] have been saying really relate to me,” and adds that it seems more sincere and less staged when students, rather than teachers, give advice.