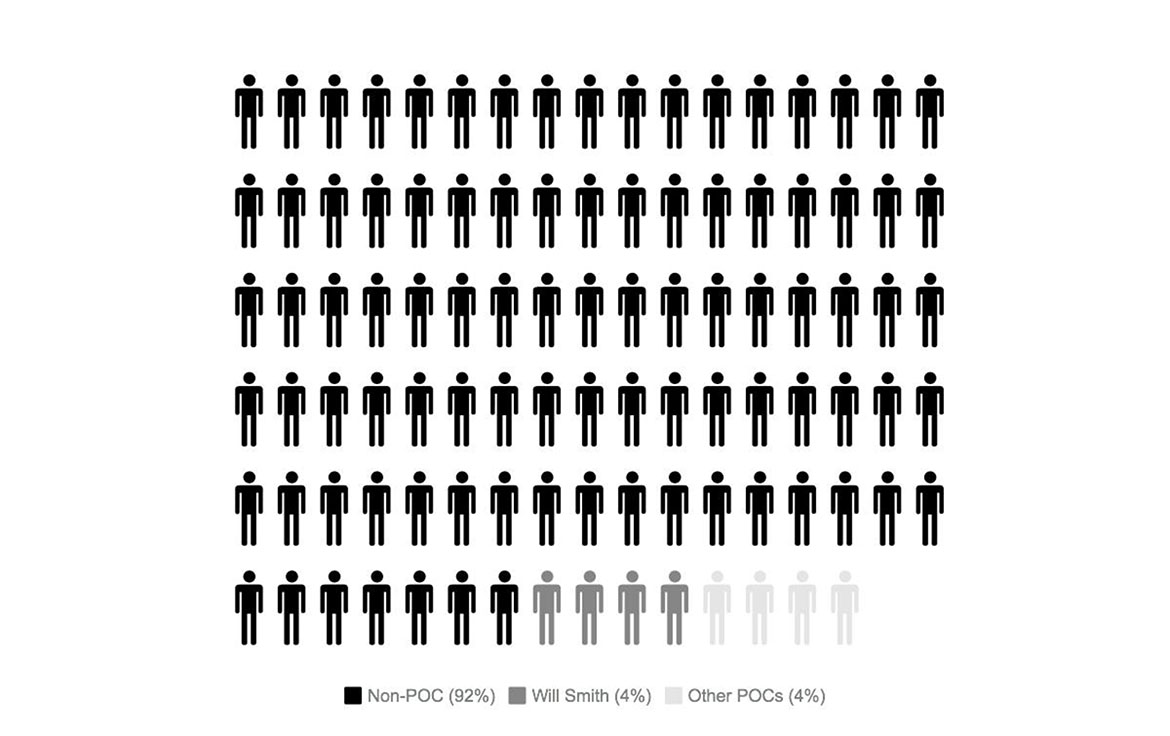 Only 8 of the top 100 grossing Sci-fi films include a protagonist of color, half of which were Will Smith. Within American media, the future is painted as white, so much so, that even colored characters from books and novels are cast by white actors in film adaptations.

When uproar arrives in response to the casting of Scarlett Johansson as an Asian woman in “Ghost in the Shell”, or the continual, now almost comical, movie trope of quickly killing off colored characters, it is not trivial. It is a justified reaction to a lack of cultural diversity within Sci-fi, and on a larger scale, within American media.

In making such insensitive casting decisions, Hollywood has both normalized racism and cultural appropriation, but generated a world where fantasies of the future include flying cars and robots, but no people of color.

The nature of whitewashing in film takes two forms: direct appropriation, such as blackface, and exclusion, and the dominance of white protagonists in film. While some may label the former as blatantly racist and a thing of the past, from an era when, in the 40’s white women like Alice McMahon were nominated for Oscars playing the role of an Asian woman, this repeated trend as seen in “Ghost in the Shell” and “Dr. Strange” demonstrate otherwise.

Denying Science Fiction the diversity that already exists in reality creates an environment for posterity that teaches that the future does not belong to Americans of color. Denying Science Fiction diversity seeks to stifle the voice of Americans of color, to prevent it from claiming its rightful place in the future, as equals to their white counterparts.

Though the latter is perhaps the less racially insensitive choice, it is, in its own manner, equally damaging to minorities. The world we live in today is a diverse one; the majority of children under 10 in this country are people of color. The 44th President of the United States was African American. Black Lives Matter continues to accrue followers, and racial diversity and discourse expands within our nation.

However, the battle against oppression of minorities is an uphill one, and providing a bold vision of the future, one as honest and inclusive of the colored experience as reality, is paramount. Junior Sachin Shah weighed in, telling, “whitewashing in film has a deep seated effect on American culture, and negatively alters our psyches. The trend needs to, and is changing towards more diversity in movies, especially Sci-fi.” In a culture that is increasingly exposed to media at a younger age, the way we portray men and women in those outlets can have a great impact, even on a scale as small as a single school. How can we hope to provide our children of all races a future that is bright and inclusive if we continue to paint our utopian fantasies as white?

In response arises the movement which intersects diversity, Sci-fi, and art: Afrofuturism. Coined by culture critic Mark Dery, afrofuturism describes the aesthetic movement examining Sci-fi as a lens through which to understand and express the colored experience.

Examples of this movements effects include Parliament Funkadelic’s “Mothership Connection,”using Sci-fi and space exploration to portray a positive future for the contemporary Civil Rights movement. Today, artists such as Rihanna and Beyonce acquire the work of afrofuturists, mainly in the form of fashion, but also including music videos that portray them as Sci-fi goddesses and warriors, in order to inspire a sensation of hope by portraying blackness as an integral part of the future. Similarly, the returning Hip Hop group A Tribe Called Quest, particularly in their new album “We Got it From Here… Thank You 4 Your Service”, has recurrently used Afrofuturist imagery and music to create a positive image for the African diaspora.

Afrofuturism has begun to influence the mainstream media and attempt to rectify its whitewashing and non diverse tendencies. Movies such as Captain America: Winter Soldier, which features native African hero the Black Panther, and Disney’s Star Wars’ choice to cast black John Boyega as protagonist Finn demonstrate the beginnings of a movement towards an afrofuturist world of Sci-fi.

However, as other films, such as “Ghost in the Shell,” demonstrate, this shift will not happen on its own. Racist trends still exist within film and Sci-fi, not only within casting, but also in producing and writing. The number of colored writers and producers has only increased by 2% in the past 4 years, as found by one UC study.

Consumers ought to be conscious of the films they watch, and never be complacent with continued whitewashed cinema. Making choices conscious of the impacts they make on our nation’s cultural and racial diversity is the most effective and most easily accessible way to bring change on an individual scale in a consumer driven market. This kind of action, on a collective scale, can have great impact, and is feasible even for a high school student make a stand. To be truly vigilant advocates for justice for people of color, we must choose the Afrofuturist aesthetic. In order to create a world that addresses the problems and injustices faced by people of color, those people must be able to envision a world where those problems are solved; Afrofuturism is that vision.