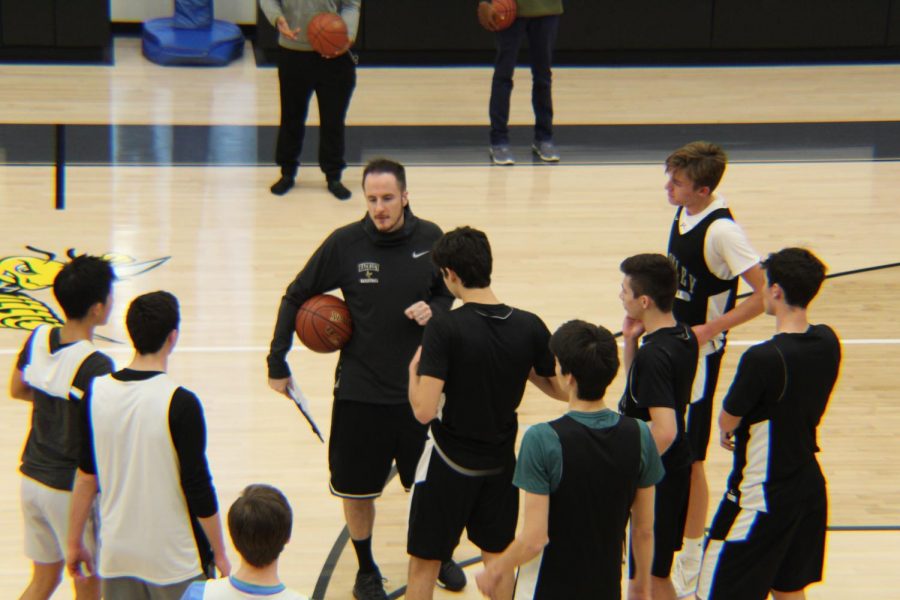 Coach Kuba explains a drill to the team. He emphasizes quick ball movement to the team in practice. This is Coach Kuba’s first season coaching the boys’ varsity basketball team.

After a few tumultuous years that did not meet the standards in terms of record and culture for the Hackley basketball program, new head coach Zachary Kuba strives to turn things around for the team. Coach Kuba spent the previous five years coaching at Poly Prep, a job that gave him familiarity with the Ivy League and what it takes to be successful in it. Despite the loss of guard Enzi Teacher to a hip injury, the team has a talented group of returning players including forwards James Sexton-Holtmeier and Matt Wiele, giving coach Kuba an exciting roster to work with.

Kuba grew up playing basketball in the Pittsburgh area at a five-day boarding high school called Shady Side Academy that was “similar in size to Hackley.” After a successful high school career, Kuba moved on to his collegiate career at New York University.

Playing at both the high school and collegiate level has helped shaped Zachary Kuba to become the coach he is today.

“I think you know what you like and you don’t like as a player. There has to be a certain level of respect and you have to know that some days guys may be tired or have a test the next so you have to try and get something out of them and make the most of it. I think being in tune with how guys are feeling playing all those years helped me,”  the new head varsity basketball coach said.

After graduating from NYU, Kuba embarked on a coaching journey that would span both the high school and collegiate levels, leaving him with many coaching contacts that helped influence the type of coach he is.

He began his career working as an assistant at his old high school, which made him realize that coaching was what he wanted to do with his life.

“It was almost like it was going to happen no matter what. I was thinking about doing something else while I was living at home coaching for a year but as I was coaching I told myself why would I want to do anything else?” Coach Kuba said.

After working for his high school, Zach Kuba worked in the player development and video coordinating at IMG Basketball Academy, UCLA, the University of Pacific along with various developmental camps such as Hoop Group. Most recently he has coached JV basketball at Poly Prep for the past four years and worked for the Riverside Hawks basketball program.

At UCLA Kuba got to know Ben Howland, a highly successful Division I basketball coach who has reached the Final Four, and considers him to be a friend and mentor. “I’ve learned a lot from [Howland] especially in terms of defense and tactically how to guard,” Kuba said.

Coach Kuba has gotten off to a great start at Hackley, with many of his players immediately taking a liking to his personality and coaching style.

Star guard Enzi Teacher describes the new coach as “a family man who treats the team as if it [were] his own family. He is dedicated to improving the program as is seen through his work ethic.”

Coach Kuba also understands how to go the most out of each player. “Kuba is an understanding coach who motivates you to work harder through positive reinforcement rather than negative reinforcement. He brings the team together and creates a sense of unity through his positivity and personality,” Senior Ben Monroe said.