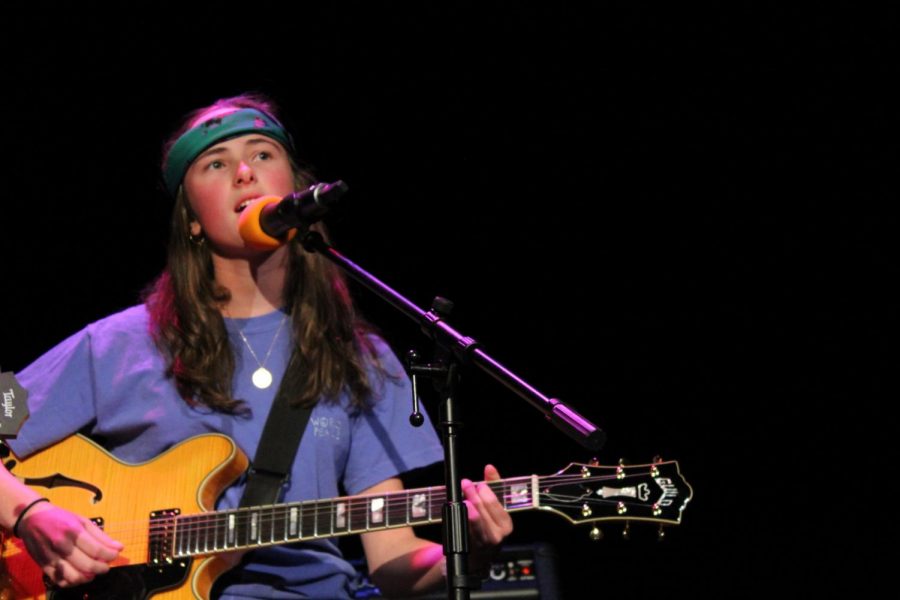 Coffee House would not be possible without the hard work and dedication the house band provides each year. This year, the band is made up of seniors Richie Nuzum and Benjamin Monroe, along with Junior Maggie Broaddus. Their musical chemistry was evident in the most recent Coffee House, where they dressed up as “hippies” and performed both an opening and closing piece with enthusiastic audience participation.

“The week leading up to coffee house we have rehearsals that are usually four or five hours long, and that is when we learn all the songs,” said Broaddus.

The majority of the work that goes into the coffee house is done in this one week of rehearsals. Lengthy rehearsals allow the house band to work individually with the performers, and get to know each song a little bit better. Although the house band prefers thorough rehearsals, there is not always enough time.  Regarding the most recent Coffee House, Nuzum said, “we only had two days of rehearsals, and only thirty minutes with each performer.”

The daunting task of arranging and executing such an event is only made possible by Mr. Tonken’s orchestration and experience.  “Mr. Tonken is the reason Coffee House runs smoothly. We don’t know what we would do without him. He helps run rehearsals, makes the schedule, and we really appreciate all that he does,” said Broaddus. In addition, Mr. McNaughton and volunteer students help with lighting and sound on the day of the event.

One of the best parts of Coffee House is the variety of music that is performed. While this may seem like a benefit to the experience of the audience, the house band thoroughly enjoys the diversity of music as well. “I would say Coffee House has introduced me to new artists and new genres, that I would never have discovered on my own,” Broaddus added.

The house band often plays about ten of the twenty songs performed. This is no easy task; thus, a very high level of musical experience is required. Each member of the house band has been playing music for years and has a passion for music in general. “I started taking lessons in middle school, but for the first couple years I kind of taught myself the basics,” Broaddus stated.

The current house band has been together for two years now, but with the two seniors graduating, Broaddus will be left with the task of finding new members to fill the shoes of Nuzum and Monroe. “We’re looking for recruits. It’s just me as of right now, but I’m sure we’ll get some people,” she said. Despite this, she is not worried about the future of the house band, because Hackley has a number of gifted artists with diverse musical talents and interests.

The work that goes into the coffee house does not go unnoticed by the student body that attends each performance religiously. Junior Annabel Ives said, “The house band made the performance. They really tied the whole show together, making it a special night.”

Junior Dylan Wade added, “It’s cool to see your friends play such a big role in one of the most important events of the year.”