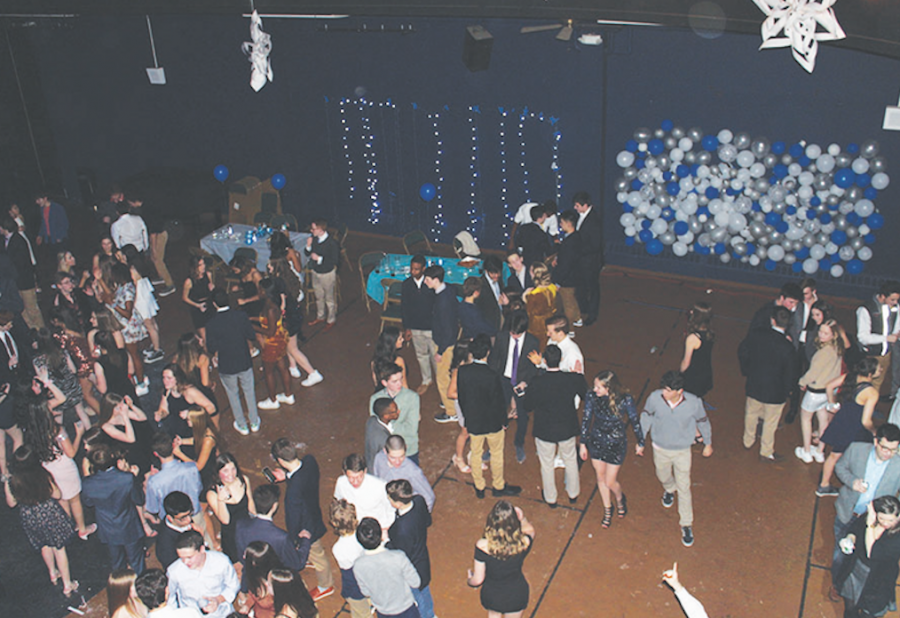 Students danced the night away as DJ Zaya Gooding played songs requested by students. Attendees enjoyed her mix of both throwback songs and current songs. Community Council worked extremley hard throughout the day of the event to make sure that the PAC was decorated according to the “Winter Wonderland” theme.

The scene begins with the picturesque high school experience: the school dance. The lights are dimmed, and the gymnasium is decked out in balloons, confetti, and streamers. Not a single thing is out of place and the months of planning, and labor done by the school dance committee is obvious: the room looks perfect. The night begins with everyone spending hours getting ready, planning their looks, and freaking out about their dates. The limo arrives and the dates, dressed to the nines, pose as their parents embarrass them by taking way too many pictures. Finally the moment they’ve been waiting for arrives. They enter the gymnasium and look up at the banner taped across the doorway and they think to themselves, this will truly be: A night to remember.

Snowball, Hackley School’s Winter Formal, occurs every year between the months of January and February. This dance is run by the Hackley School student government, Community Council who takes care of all of the logistics surrounding a school dance. Community Council spends a good portion of their year planning for this event spending countless hours thinking about logistics, decorations, food, and advertising. This dance is the height of Community Council events with lots of hard work put into it, but sometimes, as is always the case with events, the effort put into it does not always translate to the amount of interest and attendance involved in event.

Over the years, the reputation for Snowball has waxed and waned, with some years harboring large interest and praise and other years having a lower turnout and negative reviews. Mr. Canterino, a former Hackley alum and current English teacher provides a possible explanation stating, “I think it’s determined by the upperclassmen. If the Upperclassmen are excited about it and they really invest in it, then the underclassmen will take their cues from the[m].” While Community Council is responsible for spreading word about the event and garnering interest, this idea also points to fact that excitement surrounding school events stem from the older kids who make a large impact on the younger kids. Leadership emerges in all forms and while Community Council is a major leadership group in the school, the Upperclassmen represent a form of leadership as well that could help increase the amount of interest in school events like Snowball.

Some other comments that might explain why Snowball does not always garner the best reputation is explained by sophomore Odessa Buell, a new student at Hackley this year. “Some[times] it’s [just] a little bit awkward, [especially] if people go with people that are not their friends, [like] as a date.” This second explanation is yet another example of how years with low interest in Snowball could stem from natural components of the student body. Finding a balance between providing a space for student enjoyment but also limiting the uncomfortable aspects of the general high school experience is a difficult one to navigate and is often unavoidable. Part of being in high school and having events like these automatically means that things could be “awkward”, a component that may or may not have the ability to be remedied. Also, in settings like these, new social pressures surrounding dates and dancing in front of peers settle in, another possible reason why the “awkward[ness]” might occur. Nonetheless, Odessa Buell expressed her excitement for the possibility of the fun night that would occur and she was looking forward to experiencing it.

In terms of room for improvement, a suggestion by Charlie Rudge, sophomore at Hackley School, was made that Snowball be turned into a Homecoming Dance. He praises the prospect saying, “[Homecoming] is awesome at other schools, and you [get] to have a dance [that lets] people meet each other and come together at the beginning of year.” This idea provides the possibility for new students to become quickly immersed into Hackley culture early on in the school year. This is an idea that already exists as is seen through bonding activities during First Friday like the Freshman Boat Regatta, but would be expanded to a higher level, including the entire Upper School. “It just seems like an awesome way to ring in the school year,” he continues. Having events like these earlier on could lead to some more bonding and opportunities for the entire Upper School to gather and spend more time together.

Keeping in mind the areas for growth, Snowball however, often receives large amounts of praise for the events and activities offered like the photo booth, great food, and good music. Senior Ismene Germanakos raved about the great pictures from the photo booth and the raffle activity that has occurred in numerous years with prizes such as gift cards to restaurants in Tarrytown. Components like these allow the Snowball experience to be more enjoyable and unique in a way that’s different from other schools, especially with the tradition of student DJs, like senior Zaya Gooding.

Overall, with positives and negatives, every person interviewed highlighted the importance of having events like these and gave their praise of the event stating it as a way for the student body to make unforgettable memories. Mrs. Washington, current Spanish teacher and Hackley alum, summarized this concept perfectly in stating, “It’s a good space to have everyone at an even playing field. You provide a space for kids who are really into dancing to show and bust a move in front of everyone, a place where everyone can be themselves and hang out.”