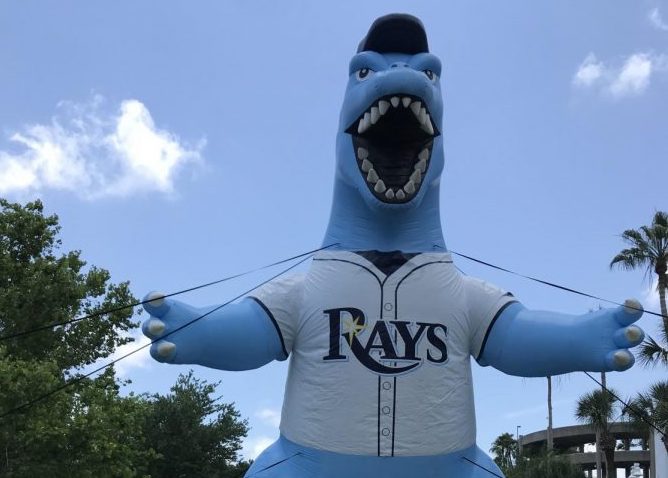 Sunday afternoon, all the fans were in for a real treat. Reigning AL Cy Young champ (best pitcher award) Blake Snell was on the hill. The marketing staff, however, wasn’t so thrilled. Whenever Blake Snell pitches, the Rays set up a massive 40-foot inflatable “Snellzilla”, Blake Snell’s nickname. Extremely exciting aside from when you’re one of those responsible for setting it up. So yeah, my Sunday morning was pretty brutal. Not only did we have to inflate the monster but at the VP of marketings request, Snellzilla would be inflated in a different location than normal adding to the difficulty. After all the grueling manual labor in the 95°+ weather, I was treated to watch the Rays play the Yankees. It was a good game, but I did leave a little early to make sure to catch the NBA games seven being played that afternoon and evening. Looking back on that decision it was definitely the correct one as an eighth-inning power outage inside the dome led to a 45-minute delay in the stadium. After this to make matters worse the Yankees rallied 5 runs to seal the game.

Right as I was getting to know all the folks up in marketing, my time with them came to a close and today marked my first day with community engagement. Being thrown upon a whole new department was pretty tough and even a bit awkward as they were far less friendly than the people in marketing. Today was really slow for me as I really did not do much aside from a few trips to and from storage rooms to collect giveaway supplies. Aside from the major fundraising events run by the Rays, like casino night held last Wednesday, the community engagement department deals with local nonprofits. When these nonprofits look for donations the folks that I was with today don’t send them money but rather ticket vouchers, autographs, and other actionable material.

The most exciting part of the day was the sexual harassment training that all Rays employees had to attend. Here I saw my old friends from marketing. The speaker who came in actually had us play a Kahoot about signs and effects of workplace sexual harassment. We formed teams by the people sitting at each table and started with the most important part of Kahoot, coming up with a name that will make all your classmates or in this case coworkers crack up. Someone at my table suggested something like “The Jack*sses” and that became our name. However, Kahoot does not allow swear words in names so it automatically changed our team name to “Lotion”. This actually was by far the funniest name in the 50 team Kahoot and partly because we were in first for most of the time made both the speaker and the whole audience wonder who the hell was named Lotion. If you don’t find this funny maybe it was a “Ya had to be there joke” but either way we finished up in 3rd place which was pretty respectable.

As I was preparing to leave for the day, the clouds finally stopped pouring rain so I was able to bike back as usual. Because I don’t have a car down here and the stadium is only like 2 miles away from the hotel I’m staying at I registered with SoBi in the area (operates like Citi bike) to go to and from the stadium. Today I went a bit out of my route to go to Publix and restock my hotel room as my food was running a bit low. As this weekend I was finally able to get all the schoolwork I had to make up out of the way, this week I should be freer to explore St. Pete and maybe go out for meals rather than using Uber Eats