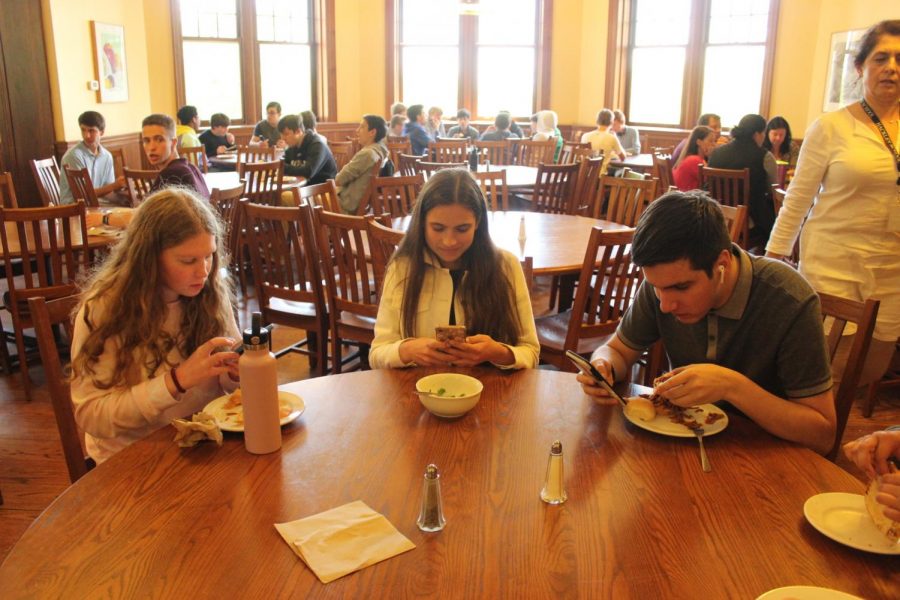 Students glued to their technology during lunch demonstrate the necessity for a day without technology. In recent years, the role of devices has become more prominent both in and out of the classroom.

A group of students sit across from each other around one of Hackley’s round tables in the lunchroom in silence. Each student is preoccupied with their phone and too busy with the digital screens to converse with one another. This situation is exactly what Hackley administrators sought to avoid when they conducted an experiment known as “Tech Free Tuesday.”

On March 11, Upper School Director Andrew King sent out an email to the student body regarding the idea of “Tech Free Tuesday.” Students and faculty were asked to leave all electronic devices, including phones, laptops, and tablets, out of the dining room to encourage face-to-face conversations with friends.

Regarding this experience, junior Jaewoo Bang said, “I thought it was a really good way to appreciate our surroundings and what we have even without technology when our lives are usually so centered around it.”

Hackley is not the only school to have implemented this experiment. The movement, also known as “No Tech Tuesday”, is sponsored by Watson’s, a retail company that offers the chance to win a $1,000 gift card for people who pledge to go tech-free on Tuesday on their website. In addition, there are similar movements to promote respites from technology, such as the National Day of Unplugging.

In today’s increasingly modern world, students and adults, are relying on technology more and more. Studies have shown that the average high school student typically spends nearly nine hours a day in front of screens. Whether it is used as a tool to accomplish work, or just as a means of interaction through social media, technology is playing a greater role in people’s lives.

The “Tech Free Tuesday” experiment enabled students to actually talk with each other instead of being absorbed by their phones. There were more conversations happening and face-to-face interactions at lunch than during a regular school day. Therefore, in an attempt to reduce students’ increasing reliance on technology, Hackley should consider implementing other such days in the future.