The beginning of chapel talks: seniors reflect and advise 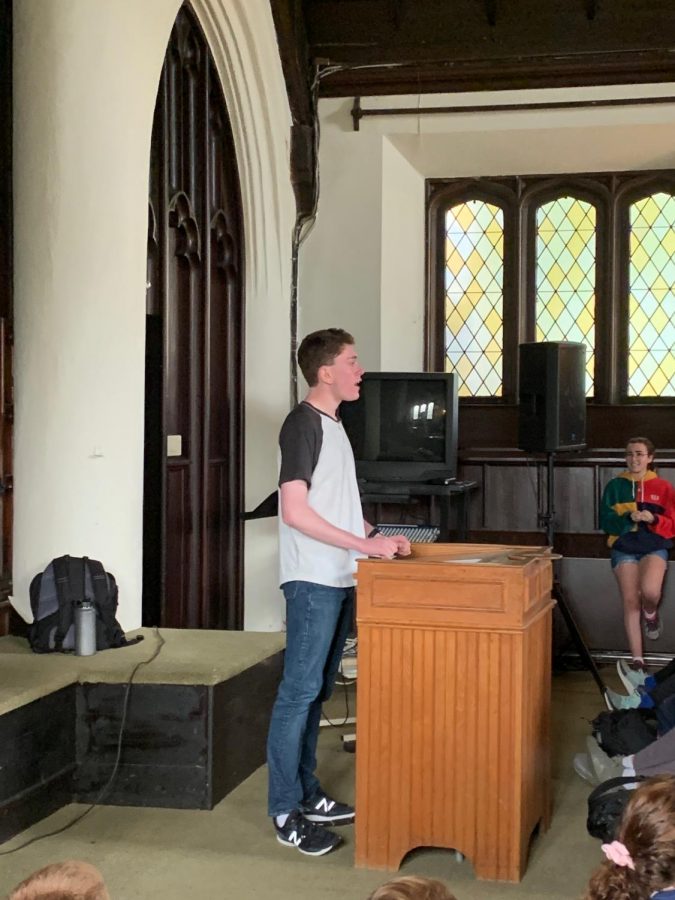 In a reflective piece about the role that music plays in his identity, senior Oren Tirschwell delivers a rousing speech to ninth and tenth graders. He advises them to be mindful of the way that offhand comments affect those around them, and to inquire about their peers' interests rather than poke fun at them.

There is little more daunting than addressing personal values and struggles in front of an audience of more than two-hundred judgy teenagers. However, every year, dozens of Hackley seniors volunteer to do just that.

As students who have persevered for more than three years of the Upper School, seniors are well qualified to impart wisdom upon less experienced underclassmen. Aside from sharing tips about which teachers are sticklers for dress code, and the best sandwiches to make in the cafeteria, they are also encouraged to impart lessons about more meaningful topics. Opportunities to do so occur during Chapel Talks for the freshmen and sophomores that occur in lieu of grade-wide announcements during their break meetings.

Oren Tirschwell braved the stage on Monday, September 16th, to kick off the chapel talk series. In addition to both the freshman and sophomore classes (for whom the talks are mandatory), the chapel on Monday was brimming with students of all grades and teachers from varying disciplines. When introducing Tirschwell, Senior Dean Chris Loomis highlighted that the sheer number of his peers and teachers who piled into the chapel to support him showed the role that he plays in the community: that of an enthusiastic participant eager to learn.

Tirschwell opened by introducing himself and the main idea of his oratory through an anecdote about a speech that he performed as a junior for an unrelated activity. In the former presentation, he emphasized the importance of being true to oneself, which he exemplified through maintaining his love of school despite criticism that he received.

After giving his first presentation, Tirschwell felt confident and proud of what he produced. That quickly changed when he was approached by many of his peers who noted that the content of the speech was “too cliche.” They added that telling students to “be yourself” is an overdone trope that is common among speakers. Although he disagreed with this assessment, the words resonated with Tirschwell by prompting insecurity about his identity and his values. The stinging of these words led him to the main idea of his subsequent chapel talk: the importance of being mindful.

He stated that regardless of the intent behind a comment, even a seemingly benign criticism has the potential to undermine someone’s identity and highlight their insecurities. Shrugging off the insult with a smile or laugh does not necessarily indicate that the words do not sting, Tirschwell added.

To read the complete text of Oren Tirschwell’s chapel talk, click on the story below!