The rise of female political leaders: Hackley leads the charge 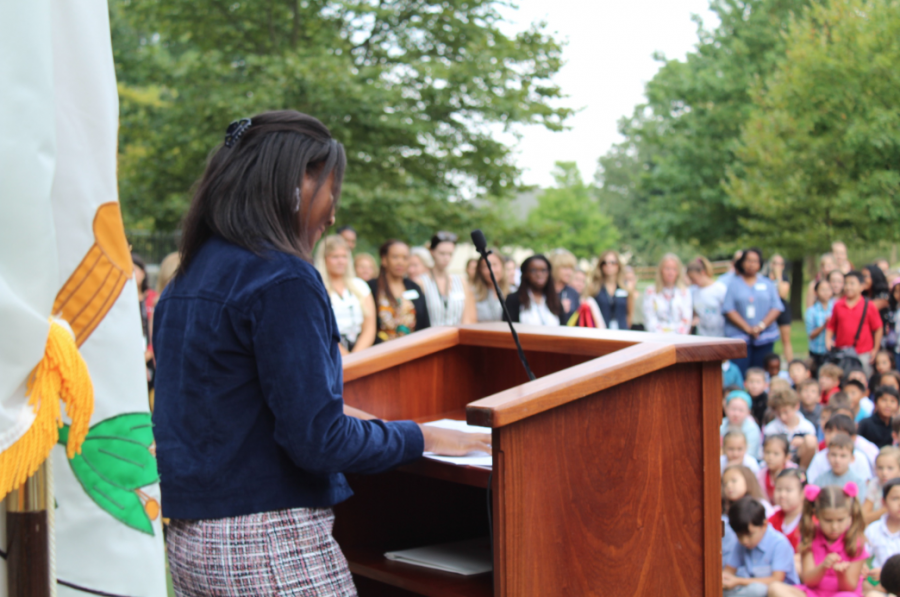 Student Council President, Taylor Robin, addressing the K-12 Hackley Community with her Commencement Day Speech about what her new position means to her.

While much of the country seems to need time to adjust to the idea of a woman in a presidential position, Hackley has embraced this concept with open arms. For the last five years, the president of the entire school has been a woman and for the last two, a woman of color. These accomplishments have not gone unnoticed and deserve to be recognized, given the hard work of these women and the fact that gender and race seem to not play a role for Hackley students considering which candidate genuinely deserves the job.

This trend began in 2016 when Ally Pettiti became one of the few women throughout Hackley history to win the student body presidency. This was an exciting time for the school, but an especially exciting moment for Ally, who had invested so much time and effort into Council throughout all four years of her high school career.

Ally said that the day she won was “one of the most rewarding days I’ve ever had as a Hackley student.” While she was overjoyed at the prospect of being one of the school’s few female presidents, her journey to that accomplishment had not been a completely smooth one.

“Throughout the actual election, [between] the nerves and high competition environment [I] was put in, [it] was very challenging to navigate,” Ally recalled. Experiences like running for student government can be exciting and rewarding but, as with all things, it can be a double-edged sword. When considering the amount of energy and hard work it takes to prepare for this position and the courage to put yourself out there in front of your peers — combined with having to defy a norm that many people may not be willing to challenge — it can be a difficult process.

“I felt a culmination of emotions where part of me knew how much I deserved it and was unbelievably proud of myself, and then there was the part of me that gave into my competition and made myself feel like maybe there was a chance I couldn’t do it,” said Ally. Being one of the first to do anything is a difficult feat, let alone running for a public position that is determined based on the opinions of peers and faculty.

Despite a journey filled with challenges and triumphs, Ally was able to accomplish a multitude of goals and spearhead numerous events over the course of her presidency. One of these goals was a diversification in the type of events Hackley students attended throughout their time on the hilltop.

“It was always important to me to make sure that students at Hackley had more than just an academic or athletic experience while attending, and Council was my own personal way to provide events and activities where students could come together in different ways,” she said. While it is important not to put too much emphasis on the female aspect of her presidency in order to normalize this trend, it is important to recognize it significance. Nevertheless, Ally is proud to be a trendsetter.

“It’s so nice to see a change in the pattern and to see that more and more women at Hackley are feeling comfortable to run and are being rewarded for that courage and also for their hard work,” Ally said.

Francesca Docters, Class of 2018, echoes the sentiment of highlighting, but not overemphasizing, a female presidency.

She said, “I’m happy to have continued the trend, but I think what’s more important than the trend of female presidents is that all individuals at Hackley should feel empowered to step up to the plate and be a leader — and [the definition of] a ‘leader’ extends beyond the title of president.”

“It’s not a trend that has to end or has to continue, but the message it should reveal to the community, of limitless opportunity and inclusivity, is so powerful,” she added.

“We had to work together and everyone in the room had to know they mattered,” Francesca recalled.

She considers her presidency slightly different than those of previous years in that she tried to focus on empowering other members of council and emphasizing teamwork in order to achieve a collective goal.

She had “hoped that [her] peers would feel empowered to speak up, share their own ideas, and participate in accordance with their strengths as leaders in the group,” and that this would lead to a lasting legacy at the school.

In creating such a legacy, Francesca was excited at the prospect of creating a new Hive System for the Upper School and thus inspire the younger members of the community.

While Zaya Gooding, Class of 2019, continued the trend of female presidents, she also made history in becoming one of the few women of color elected as Student Body President.

“I was honestly dumbfounded when I won. I knew my speech was well-written and my campaign was popular and well-thought-out; however, I really didn’t think I would be successful. Running against three white men and only one other woman of color at a mostly white school, I felt as though the odds were stacked against me,” Zaya said about her own shock at winning.

Zaya described the hidden difficulties of running for student government, echoing a similar sentiment to Ally Pettiti. These challenges are nuanced, but very real, and need to be included when mentioning the types of unique obstacles women and women of color face when aiming for a position of power.

In terms of the presidency itself, Zaya highlighted a multitude of student groups on campus rather than simply focusing on sports teams. She wanted to involve clubs more frequently into Community Council’s plans and to have a diverse group of community members involved. But in attempting to accomplish these goals, she also faced some struggles.

“On Council, things are always changing, and as president, you have to be thinking about and sometimes doing a billion things at once,” Zaya said.

“When somebody on council messes up and fails to do their job, it falls onto you,” she added. She later acknowledges that while this is the nature of the position, it was difficult nonetheless.

In terms of her overall presidency and acknowledging the history she has created and participated in, she concludes by praising this trend and wishing nothing but the best for current and future leaders of the school. “I especially think that the black girl magic on Council is unmatched. Taylor is a strong, friendly, and capable leader and I can’t wait to see what she does this year!”

Taylor Robin, the current class president, expressed nothing but excitement when asked about her feelings going into her presidency. She began by emphasizing the importance of representation in government and even spoke about how it played an impact on her journey to the presidency.

“When I was a freshman and Alex Meyer was our president, [it helped me] see that something like this was attainable,” she said. She believes that this phenomenon is bigger than our school, applying to the world outside of Hackley.

Her goals for the year entail firmly establishing the House System among the student body and to be more transparent about what Council does for the school.

“You look through the world through your own eyes, and you only know how things affect you. I think it’s important that [different people] have representation because I can’t [speak for all groups].”

Hopefully, in younger students seeing themselves or versions of themselves in student government, more individuals will feel inspired to reach for high-level positions — just as these women were able to.