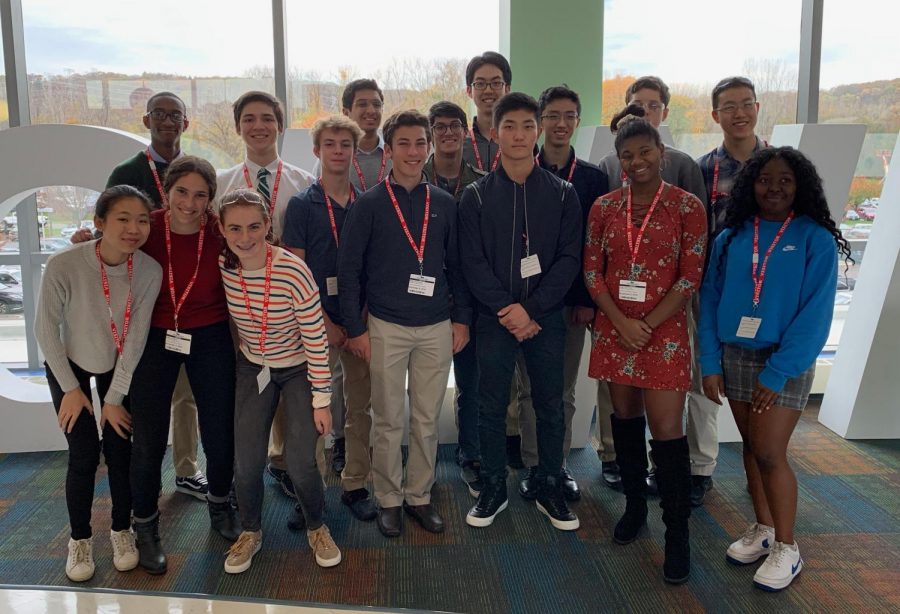 Standing in a line against the wall, students gazed through a glass barrier separating themselves from an intricate, multi-million dollar machine for staining. The machine was operated by two scientists in lab coats and is capable of completing more work than fifty scientists would on a workbench.

This was just one of the impressive sights students experienced on a trip to Regeneron Pharmaceuticals last month. On November 5, students from the Independent Research Program (IRP), and two students who were chosen from Advanced Biology, Jimin Jung and Tajah Burger, spent an entire day at the headquarters of Regeneron, a biotechnology company. Students departed campus and headed to Regeneron, headquartered in Eastview, near Tarrytown, on a trip supervised by Dr. Andrew Ying, the advisor for IRP.

“I really enjoyed the experience of going to a professional lab setting and seeing all the professional researchers so dedicated to their work. It is clear that these people will be at the forefront of scientific discovery very soon,” senior Kireeti Josyula said.

In preparation for the trip, students watched a video recording of a presentation given at Hackley School by George Yancopoulos, the co-founder, president, and Chief Scientific Officer of Regeneron. Dr. Yancopoulos emphasized the company’s philosophy of “doing well by doing good” and delved into the history of how the company has evolved since its founding in 1988.

In 1989, while he was still in academia, Dr. Yancopoulos was invited to join the company by Leonard S. Schleifer, President and Chief Executive Officer of Regeneron. Under their leadership, Regeneron has grown to become one of the most successful biotech companies today. Regeneron focuses on bringing new drugs to market that are targeted at combating a wide variety of medical issues that affect people around the world. Most recently, the company has developed two new experimental drugs that have been successful at reducing the risk of death from the Ebola virus. According to the Wall Street Journal, a clinical trial conducted in the Congo has shown that these drugs have saved 90% of people who were treated.

Throughout the trip to Regeneron, students had the unique opportunity to extensively tour various facilities and different sections of the company with detailed explanations of the research process by researchers who worked in the field. Students were able to learn more about Regeneron as a whole and the work that the company is involved in. Tours throughout various facilities outlined the basic process of how the company begins to develop new experimental drugs. During a lunch provided by Regeneron, students heard from a panel of scientists who worked at the company followed by engaging with these scientists in a lengthy question-and-answer session. One takeaway from this discussion for the students was how there is no one set career path for those who wish to become involved in scientific research.

“The scientists’ passion about their research was apparent and contagious,” senior Josh Saha said.

This trip to Regeneron was the first of its kind since the Independent Research Program was established in 2015. Dr. Ying and the students from IRP hope to continue the tradition of an annual field trip to a similar company or laboratory in future years.

“I thought it was a really fantastic opportunity to see what a local world-renowned pharmaceutical company was like and the conversations with the scientists at lunch were inspiring and thought-provoking,” Dr. Ying said.