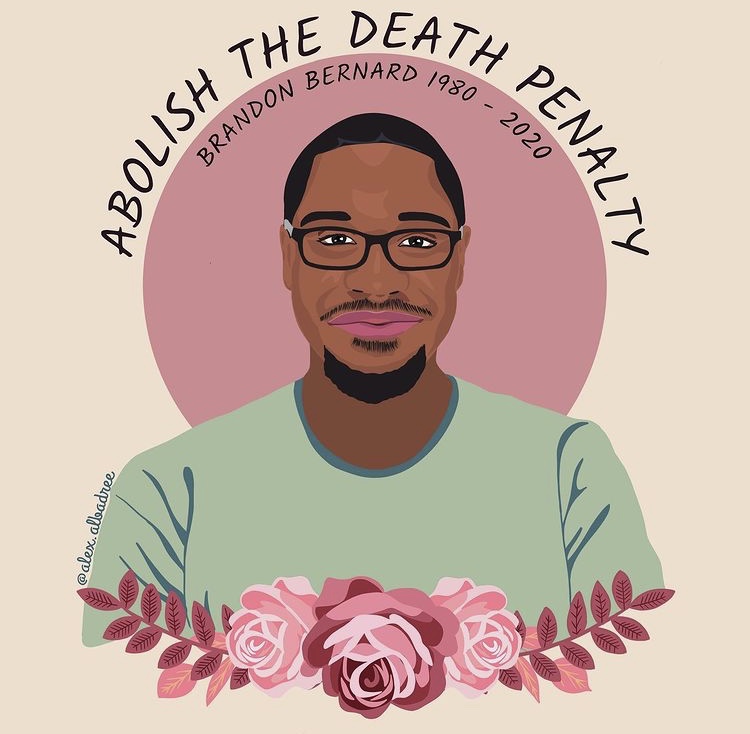 Brandon Bernard was unjustly put to death by the federal government on Thursday, December 10th, 2020. He was 18 when he, and a gang of others, took part in a robbery that resulted in the murder of youth pastors Todd and Stacie Bagley, eventually leading to him being put on death row.
This decision was surrounded by much contention and debate around the morality of the death penalty, the arbitrary nature of an 18-year old cut-off, and the racism that oftentimes designates harsher punishments for Black offenders than their white counterparts.
In the weeks leading up to his execution, critics had been calling into question, with reasonable concern, Brandon’s presumed guilt, citing new evidence that contradicts the prosecution’s case. His legal team alleged that the government withheld information that could have swayed the jury to advocate for a life sentence rather than being put to death. According to a CBS News Story, the new evidence suggested that Bernard did not shoot or kill anyone in the murder of Todd and Stacie Bagley. After hearing this new evidence, five out of the nine original jury members on the case admitted they would have changed the sentence from capital punishment to life imprisonment.
Brandon’s legal team has argued that Brandon and his capacity to make good decisions was not fully developed at the time of the murder. They have also argued that Brandon’s case was marked by racism against young Black males, who are often treated as if they are older and less innocent than young white males. This is a phenomenon often referred to as “adultification.”
Kim Kardashian, a public advocate of Brandon, denounced the Supreme Court’s decision to move forward with the execution in a tweet, while noting that in his final moments, Brandon was “selfless as always” and “focused on his family and making sure they are ok.”
With the recent state murder of numerous Black and Brown individuals, the conversation continues about the senseless destruction of so many Black lives. Outcries for more men such as Dustin Higgs have continued in an effort to help more people who have unfairly been put on death row. Regardless of the outcome, one thing that will likely continue is the growing opposition towards the idea of capital punishment. Many will soon be looking to our next president, Joe Biden, to address this issue and hopefully begin to enact some criminal justice reform to minimize the racial discrepancies within the criminal justice system and end the death penalty once and for all.
This conversation aligns particularly well with Hackley’s new effort to promote diversity; this agenda has inspired the promotion of Ms. Jean to Assistant Head of School for Community and Inclusion and the enlistment of Diversity and Inclusion Strategist, Dr. Derrick Gay.
One thing to keep in mind when engaging in and educating ourselves on social issues like that of Brandon Bernard’s execution is the practice of empathy. As Dr. Gay would put it, it is important to assess “how we enter these conversations” and practice empathy by being understanding and open to new perspectives.