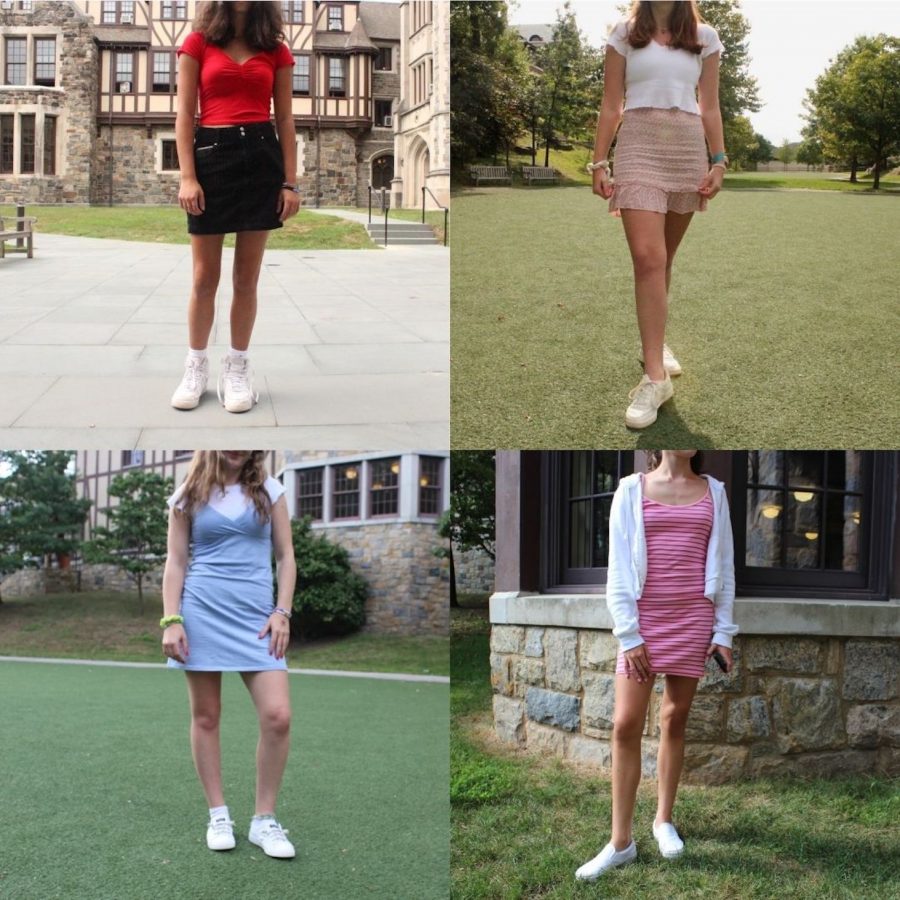 At Hackley, Brandy Melville is worn by many students. However, the body image it perpetuates is often unknown to students. And more often than not, Brandy clothes are not in dress code.

When you Google “Brandy Melville,” one of the first questions that pops up is, “will I fit into Brandy Melville?” And for most young women, the answer is no.

Brandy Melville is a European clothing brand that has become immensely popular among American teens. The fast-fashion approach to the brand’s mass-production indicates questionable labor practices, yet they refuse to disclose information about their workers’ wages and conditions.

The store advertises a “one size fits most” selection, but when you go to visit their website, most of their clothing is described as “size XS-S.” This size usually corresponds to a size O, which ranges from a 24-25 inch waist. For comparison, the average 13-19-year-old female in the US has a 32.6-inch waist, according to the CDC. Thus, one size does not fit “most” like Brandy claims.

Dr. Sadler, Director of Support Services at Hackley, explained that Brandy Melville “make[s] it seem as if their clothes are for the ‘average’ person but all their ‘regular’ people are one elusive body type.”

By promoting this ideal body type, Brandy Melville isolates the majority of young women who do not fit into their standards. They have achieved their desirability through exclusivity. And yet, Brandy Melville continues to falsely market their “one size fits most” clothes, which raises the question: what if you are not what Brandy defines as ‘most’?

Dr. Sadler explained that not being able to fit into clothes that are promoted as “so trendy” has “a real detrimental effect on young women’s body image and promotes body shaming because you can’t squeeze into an extra small.” Although no single thing leads to developing an eating disorder, Dr. Sadler said that stores like Brandy “could be an underlying reason for eating disorders.”

In the US, eating disorders have become an increasingly large issue for young women. According to the National Association of Anorexia Nervosa and Associated Disorders, “35-57% of adolescent girls engage in crash dieting, fasting, self-induced vomiting, diet pills, or laxatives.”

Sam Albright, a senior at Hackley, has been avoiding Brandy Melville for the past two years. Although she still owns some of their clothing, she made the decision to boycott the store because of its “problematic ideals and corrupt labor practices.” As someone who had experienced both the privilege of fitting into their clothes and what it felt like to not, she felt that it was young girls’ “insecurity and vulnerability that is being preyed upon” and encouraged everyone to avoid the store.

As the fashion industry makes an effort to become more inclusive, more plus-size stores
have opened to cater to a systematically oppressed body type. Some people argue that Brandy Melville is doing just that for thin girls, by being a store where all the clothes will fit them. Yet this seems to directly contradict their entire marketing strategy, which advertises inclusivity in their “fits most” selection.

Sam argued that Brandy Melville cannot be considered as a brand working towards fashion inclusivity by offering clothes for thin body types because “the entire fashion industry already revolves around small bodies” and the people who have “thin privilege” will be able to fit into other things. She believes that while “skinny shaming, unfortunately, does exist, it is not the same institutionalized and societal structuring of fat-shaming.”

The fashion industry is making many changes in order to be more body positive, so how is a brand like Brandy Melville still thriving? Although some large clothing corporations and runway shows are already taking the first step by promoting all body types, customers have a responsibility to stop consuming Brandy products. According to Dr. Sadler, “it may take young women to stand up and reject the clothing that only fits that one body type.”

At Hackley, trendy clothing brands like Brandy Melville often lead to many students dressing the same way. When these brands only cater to one specific body type, many students are left out because they are not part of what Brandy considers “most” young girls are. We need to work on highlighting not only all sizes and body types, but also different outfits and styles. Hilltop Threads, an Instagram account that showcases “the fly fits of students and faculty alike,” is already a step in the right direction.

At the end of the day, we need to erase the idea of “most” from the fashion industry. Let’s celebrate both our similarities and differences. Reject Brandy Melville even if –especially if– you can fit into their clothes.