Controversy, School Spirit and a Day Full of Sports: Students Go All Out for Fall Sting ‘21 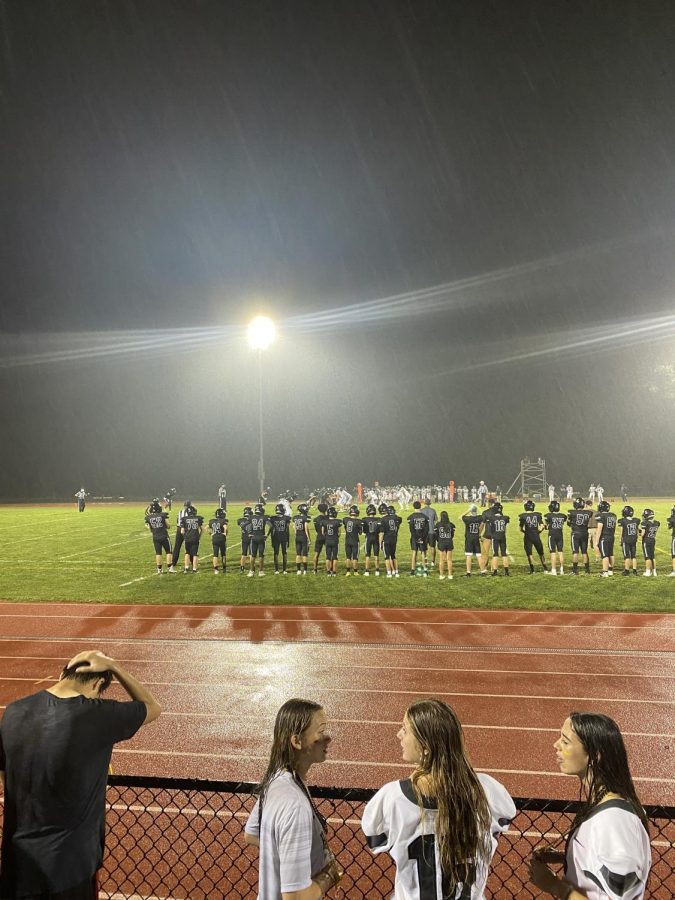 Shortly after crowds gathered for the football game, it started to rain. The chorus was able to sing the national anthem before it began raining.

By Jack Meyer and Theo Saujet

Throughout the 2020-2021 school year, COVID-19 limited school activities and therefore the Fall Sting was not held. This bottled up all the school spirit, which poured out during Friday’s Fall Sting, making it one to remember.

The day kicked off at 4:00 p.m. when Hackley Girls Varsity Soccer fought to a 2-1 win vs. Masters school. This score generated controversy between both teams since one of the Masters’ goals was called back due to a handball. The Masters soccer team called the result a tie “2-2” game on their Instagram and website, whereas the Hackley soccer team posted the game according to the referee score, 2-1. The Masters team was asked to edit their score, which will hopefully clear up the confusion.

The second and third games of the Sting both ended in blowouts, with Varsity Boys Soccer and Varsity Field Hockey winning 5-0 and 11-0, respectively. With both teams playing on side-by-side fields, confidence was flowing throughout the student body. Hackley pride swirling through the “fired up” student body as students were shouting and walking down to the arch to get ready for the march.

“March from the Arch,” organized by the class of ‘22, was an event to remember for those who attended. It started at the Saperstein Arch, with over 100 students showing up. Students gave speeches, and painted faces, chanted cheers and other themed antics were held at the Arch, all designed to motivate the student body. After the Arch events, the students sprinted up Alumni Drive to Pickert field, where they quickly filled up the bleachers. The football team said they enjoyed the energy from the student section. “The student section was electrifying. Hopefully, it becomes a tradition,” said senior kicker Joey Nadol.

The final game of Sting was the primetime football game versus rivals Poly Prep. The game started off slow from the start with the rain pouring down right on the kickoff. The rain continued for the entire game, leaving a slippery game to play. However, the student section persisted through the precipitation. For example, they were jumping up and down all game in support of the team. Although the result did not go as planned, the team fought hard to the finish, losing 34-6.

Overall, Hackley won three out of four games. The resulting excitement was manifested through the loud shouts and cheers as shown in the impressive student outcomes at each game. Hopefully, the “March from the Arch” will become a tradition, and that same student spirit will carry on into the Winter Sting.