A life-long love of lacrosse 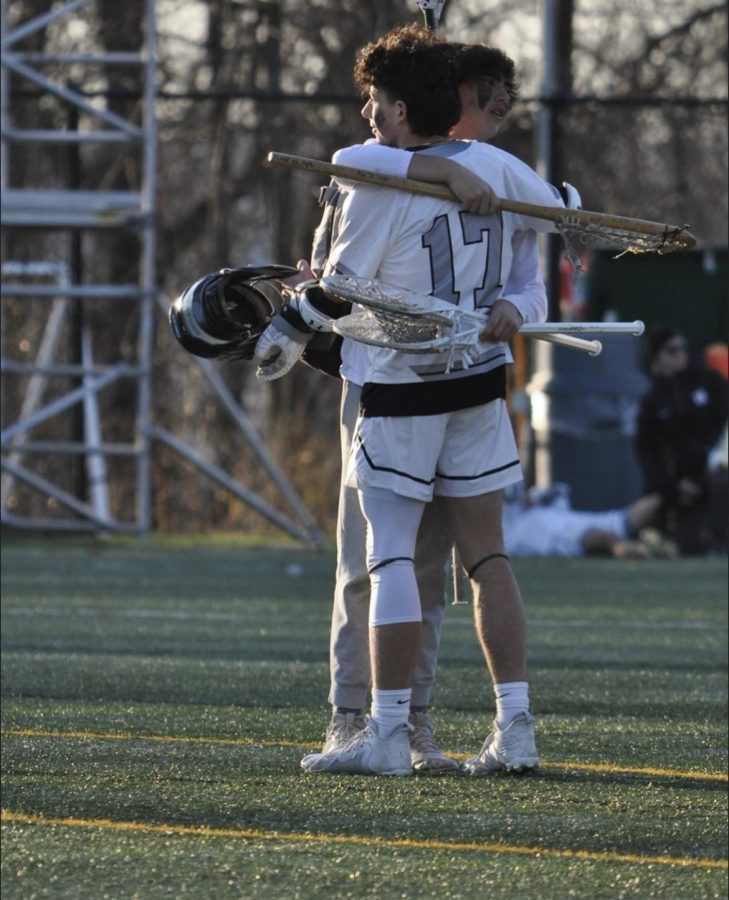 After a hard-fought win against Fordham Prep, goalie, Mac Broaddus, and Vincent Crispi celebrate their victory. Vincent and Mac played a big role in their victory helping defend the goal and coming up with big saves.

Since the age of seven, sophomore Vincent Crispi has loved lacrosse. Beginning with a local travel team in Armonk, he currently plays as a defenseman for Predators, a competitive out-of-school club team. Because of his passion, experience, and dedication to the sport, last season he was one of the only two freshmen who made Hackley’s Varsity team.

Like many other athletes due to Covid, Vincent did not get to experience a real high school season last year. Therefore, this season was even more exciting for him. Fortunately, his club team was able to play throughout the spring and summer, where he traveled around the country for tournaments, most notably, in Florida.

“Last year was tough not being able to have high school games, but I’m still happy I got to practice with the current seniors and juniors and start to build chemistry with them,” Vincent said.

Even though he is one of the youngest players on the team, Vincent noted that the team felt like family and he loved everyone on the team. He stated that the upperclassmen are great leaders and role models who make the team so much more fun to be on.

“I love playing with Vincent. He’s a team player with a great feel for the game, and definitely will help us this season,” junior John Churchill said, “ He’s a very hard worker and is always trying to get better.”

Vincent dealt with grade 3 turf toe, a complete tear of the plantar complex causing swelling and bruising on the big toe, for most of the fall and winter, which hindered his ability to practice lacrosse. During the winter months, he rehabbed with Velocity Sports Performance.

“My main goal is to win the Ivy League and NYSIAS. I think we have a very strong team this year and I think everyone on the team has the same goal, which definitely helps. ” Vincent said.
Vincent receives high praise from his teammates as he is considered a key part of the team’s success.

“I know he’s only a sophomore, but he is definitely a leader on the team. Every game he makes a big impact, and his contributions are tremendous, stopping the attackmen from scoring.” senior Jason Berger said.

Vincent’s long-term goals are to play at the collegiate level and continue playing for as long as possible.