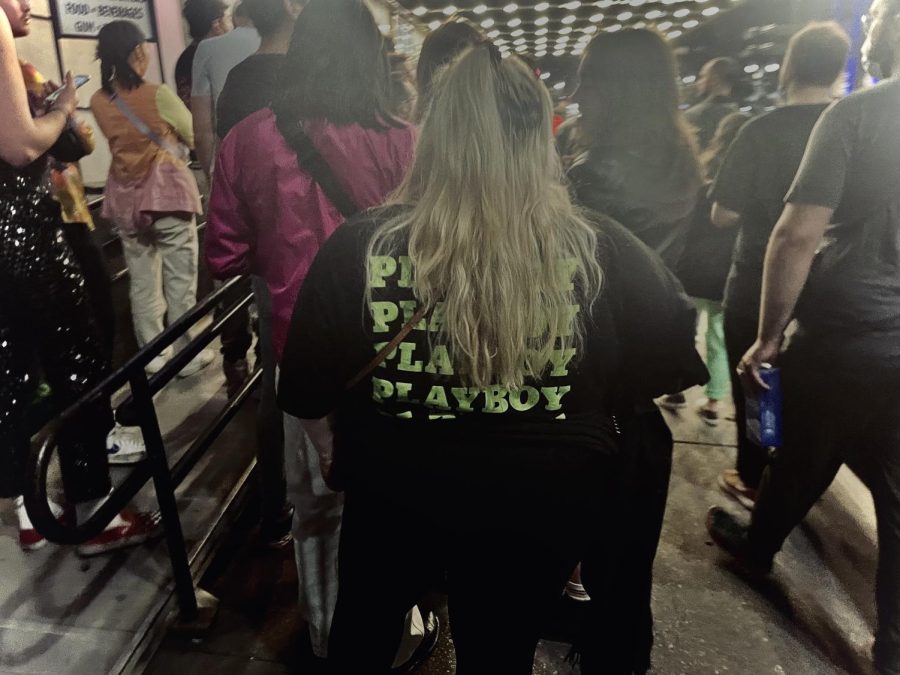 Playboy clothing isn't specifically revealing. Some of the clothing can be revealing, but it's the connotation behind the clothing that is the issue. The Plabyboy empire was created by Hugh Hefner, and was demeaning and exploitative towards women.

Walk into a young, cool store, and the Playboy merchandise jumps out at you. The distinctive bunny logo hastily drawn by a design editor on the Playboy magazine staff decades ago is now on everything from a pair of socks to shirts and exercise gear. Stores like Urban Outfitters, Pacsun, Walmart, and Hot Topic sell the clothing, and the $1.5 billion in Playboy sales in 2016 is a testament to its popularity. While seemingly a blameless silhouette of a bunny’s head, the logo alludes to a decades-long exploitative empire that teens are now wearing. It’s important to finally let go of the corporation and its bunny-shaped symbol representing the oppression of women.

The switch from being a raunchy magazine that started in the 1950s to a sensational teen clothing brand started when the company was going bankrupt in the late 1990s into the early 2000s. As sales of the physical magazine declined, Christine Hefner, the daughter of the magazine’s founder Hugh Hefner, slapped the bunny logo onto everything from clothing to home goods in an attempt to keep the company afloat. The company made extensive deals with stores like Bloomingdale’s so that their new items could make an introduction into the market. Fast forward to 2022, sales of the clothing are booming in the teenage demographic.

The Playboy website states their mission is “to create a culture where all people can pursue pleasure”. Putting aside the ambiguity of this statement, it seems pretty clear that the current generation is forgetting, unaware, or even worse doesn’t care about the exploitative and sexist figure of our parent’s generation. Hugh Hefner created the infamous Playboy magazine that depicted women clad in little to no clothing. He further established Playboy clubs that had women dressed in the Playboy bunny outfits that exaggerated their figures in accordance to lengthy training and tests to see if they ‘looked right’ and could act the part to work at the establishments.

While the current Playboy clothing ranges from small skirts to mesh shirts, it isn’t specifically more revealing than other brands or other current styles for teenagers. It’s the Playboy bunny logo and its insinuation that’s the issue. By wearing a normal t-shirt that has the logo, there’s a provocative implication and inviting sensation to the clothing where the wearer completely ignores or dismisses the history of the logo’s creator and the discriminative empire behind it. Attracting some extra attention isn’t the issue, it’s the fact that the wearer is doing so through a brand that attracted the attention of other young people years ago by using risqué pictures of women. The pictures were demoralizing to women and feminism at the time and this empire’s connotation shouldn’t continue to have a life now in clothing form.

From a young age, modernizing values tell young women that it doesn’t matter what they look like or how they dress, that their life can be anything they want. The focus on highlighting the depth of the person and not what you see on the surface means that it should be okay to then wear whatever you want. If you attract some extra attention by wearing the Playboy bunny logo then it isn’t a problem if you understand the bad empire behind it, right? Well, no. This specific logo implies a sexualization of the individual and an echo back to a time when women were exploited for the company’s purposes. The logo can’t be brought back in good conscience when the family that started the business is still profiting without changing their mindset, values, and the connotation of the bunny logo won’t change.

Hugh Heffner claimed that while many call his empire oppressive, he saw his empire as progressive for the sexual liberation and positivity it promoted for women. Besides the fact that this claim seems to appear after backlash, an empire driven by one man can’t dictate and open the door for the individuality of all women. Heffner’s Playboy bunny still represents the empire that exploited women under the guise of opening the door for their careers in his clubs and other business ventures.

The freedom of expression initiative is necessary and encompasses wearing whatever clothing or brand allows the individuality of the person, as long as it doesn’t put a frame around a predatory corporation that still puts money in the Playboy pocket.